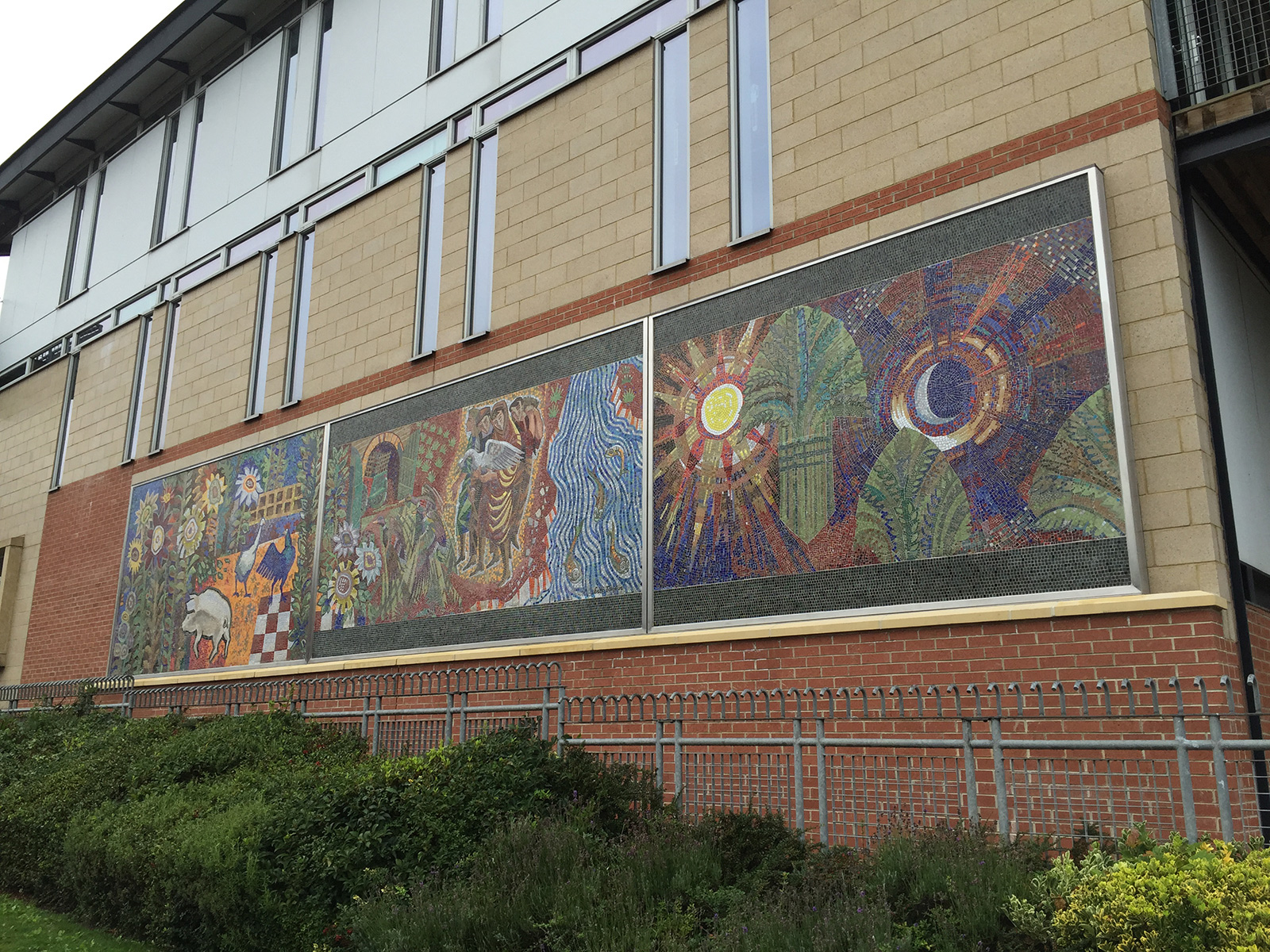 This large complicated project used all of our companies experience and expertise, to include the manufacture of bespoke stainless steel frames, procurement of glass tesserae from Italy and Mexico, and the skillful reconstruction of three large brick-backed murals in excess of 4 tons each. Once carefully reconstructed within the workshop the mosaic panels were transported to site and installed using heavy cranes over one weekend.

We were initially contacted in February 2014 by Alan Holmes (Architect) to advise and submit estimated costs for the proposed Eric Taylor Mosaic Project. 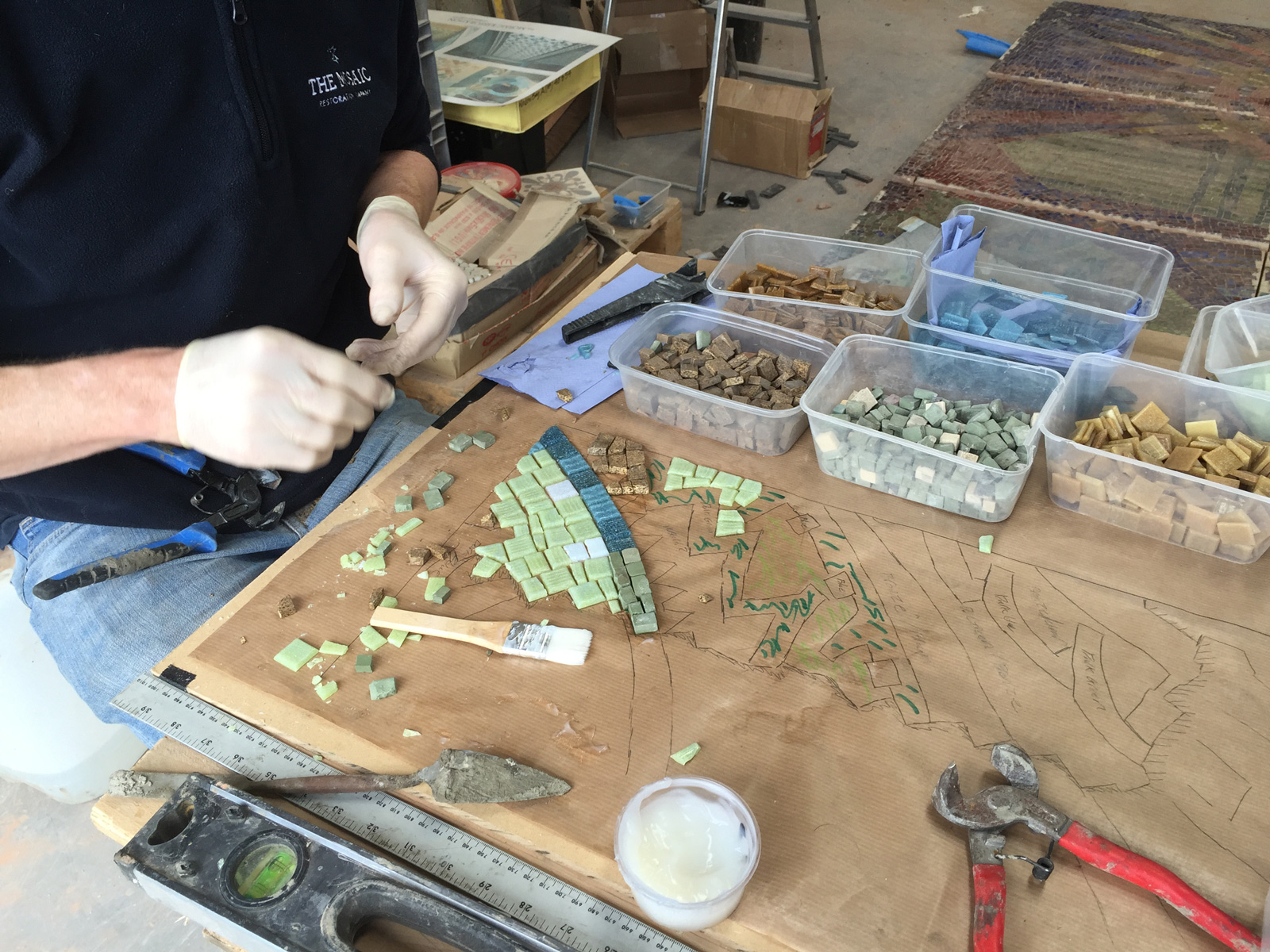 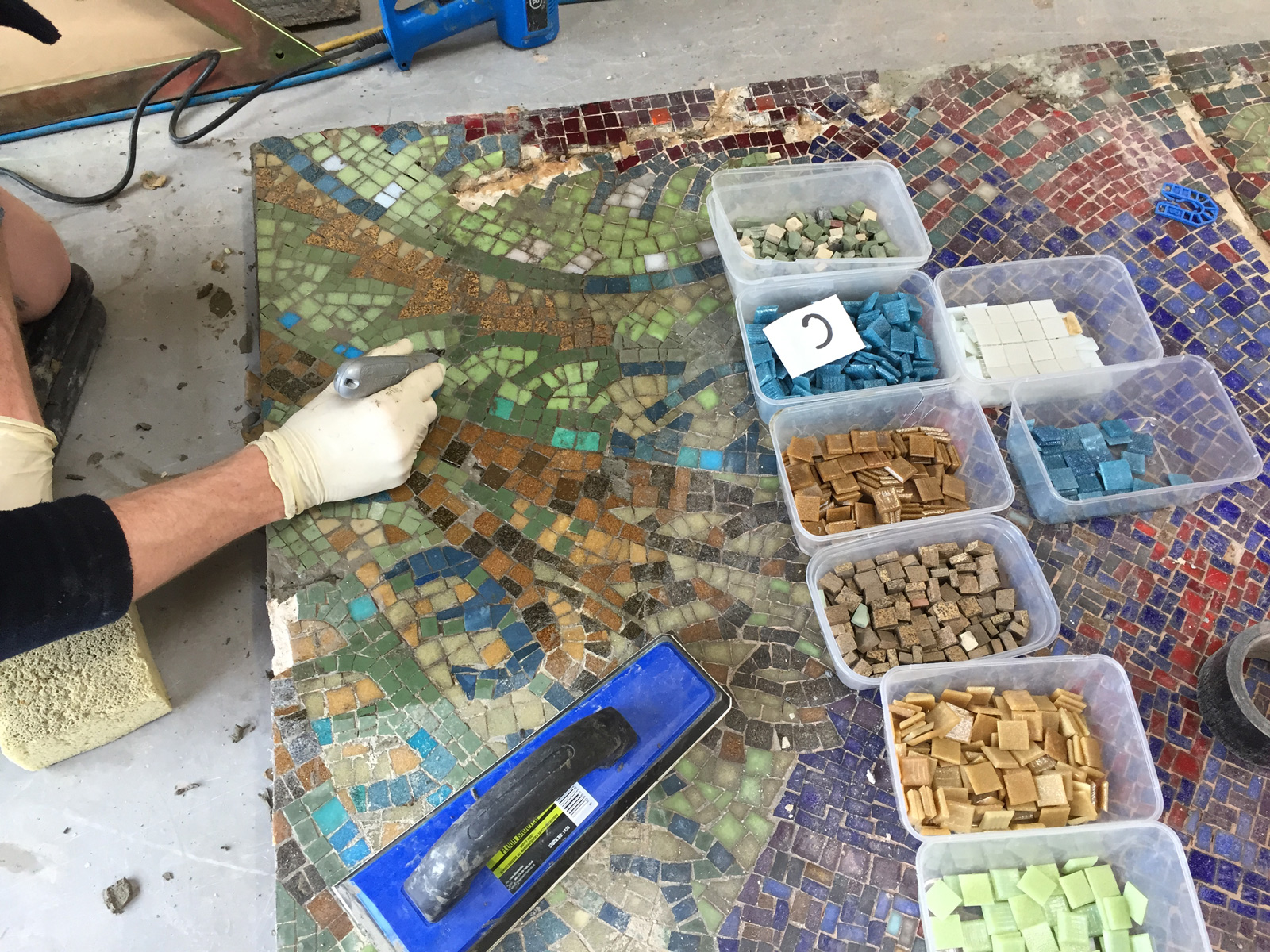 The mosaics were designed by the war artist Eric Taylor who later became Principal of Leeds College of Art. The designs were likely initially carried out as paintings, then transferred to full-sized cartoons and finally fabricated by mosaic specialists Oppenheimers in Manchester. The mosaics were executing in the traditional ‘reverse method’ using a mix of un-glazed ceramic, Venetian and vitreous glass tesserae in the Oppenheimers studio before being cut into manageable sections and transported to site. The murals were then installed by a local Leeds company onto a rendered brick wall located at the rear of the Merrion Shopping Centre in 1965.

Following recent major refurbishment works at the Merrion Centre, the mosaics were at risk of being demolished. Fortunately to the credit of the College the mosaics were photographed and removed from site by disk cutting into approximately 1m2 sections, carefully lifting the mosaic off the wall with the outer skin of brickwork still attached, then transporting and storing the mosaic slabs at Leeds College of Art in three large metal shipping storage containers.

Following our successful tender, Mosaic restoration Co. was awarded the contract in May 2015 and work immediately commenced. This illustrated record presents the different stages and methods for this challenging project, which was completed on 31st August 2015. 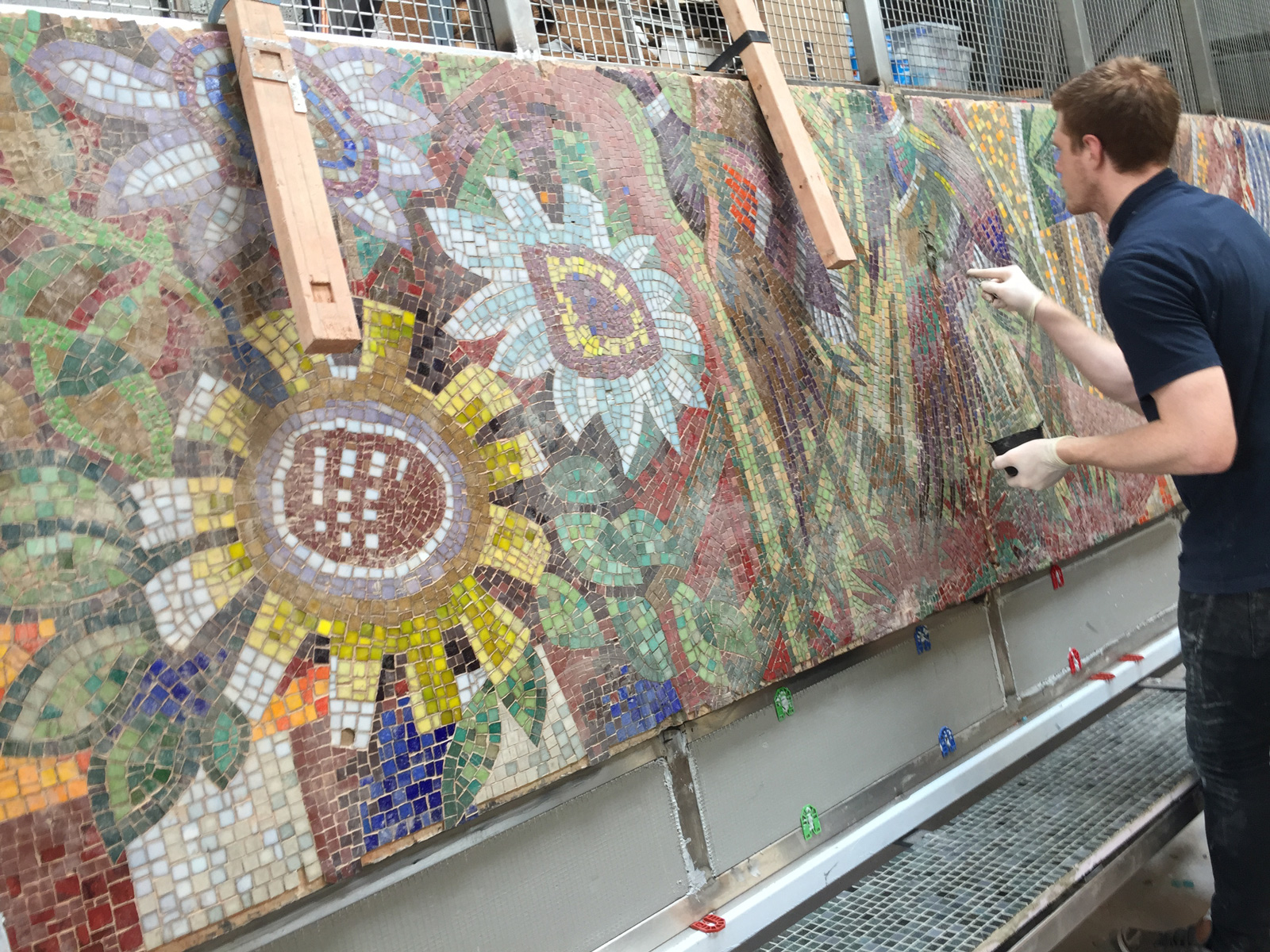 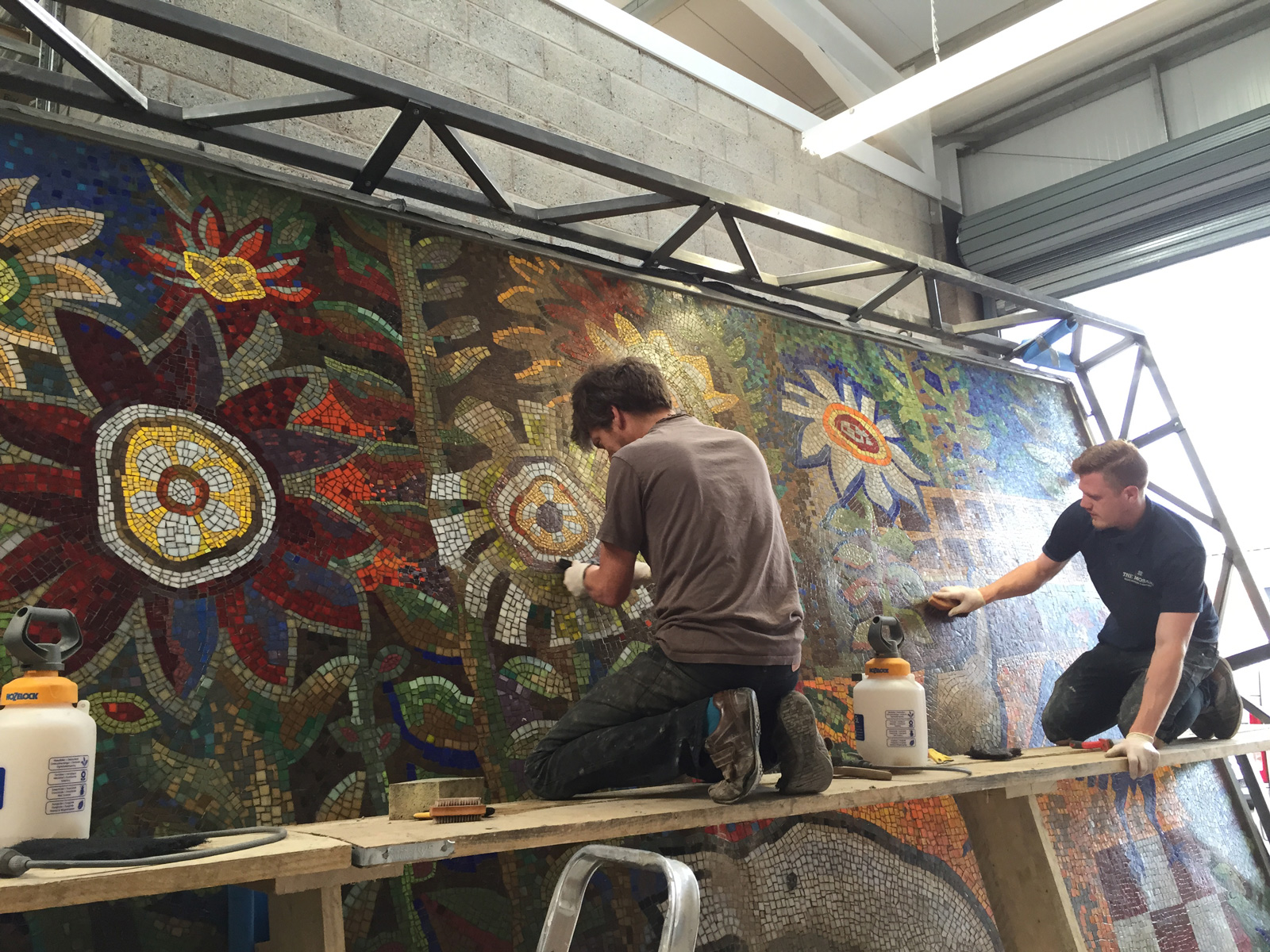